Have you ever gotten a present you didn’t really want but knew that you kinda sorta needed? (For example, socks.) Just before Christmas, that’s exactly what the Federal Reserve decided to give the country. Except the present wasn’t socks, but another interest rate hike meant to combat inflation.

Suddenly, socks don’t seem so bad, do they?

The markets reacted predictably, with the Dow dropping over 750 points the following day.1 So, in this message, I want to ensure you know what’s currently going on during the last few weeks of this year and what’s potentially on the table for next. I also want to assure you that my team and I have expected this. That way, armed with both understanding and assurance, you can focus on enjoying the holidays and spending time with family.

In short, all the things that matter.

Understanding the Fed’s Most Recent Move

On December 14, the Federal Reserve announced their seventh and final interest rate hike of 2022, bringing the Federal Funds Rate to a range of 4.25% to 4.50%.1

It’s easy to forget, but less than twelve months ago, interest rates were barely above zero. Back then, the Fed was still trying to stimulate the post-COVID economy by keeping rates low and buying billions of dollars in bonds every month. Unfortunately, while this was going on, inflation was starting to ramp up, too.

Think of it like hitting the accelerator on your car…right before you hit that patch of ice.

The Fed began reversing course in March, but it wasn’t until June that they began hiking rates in earnest. What followed was the fastest rise in interest rates since the 1980s, all designed to slow the economy and bring prices down. Over the next several months, the Fed raised rates by 0.75% at a time.2 That may not sound like much on its own, but when you realize that rates have gone from 0% to over 4% in just nine months, the full scope becomes clear.

The Fed’s latest increase, however, was only 0.50%, which we haven’t seen since all the way back in May. It’s the first sign the Fed may now be moving to slow the pace of rate hikes – although there are no plans to end the hikes anytime soon. (More on this in a minute.)

So, why is the Fed exploring a slower pace of increases? To answer that, imagine heating up a mug of hot cocoa. You put the mug in the microwave for about a minute, only to find your drink is nowhere near warm enough. So, what do you do? One approach would be to heat it up for another minute – there’s no chance your cocoa won’t be hot after that. But there is a chance your drink will end up curdling…or maybe even exploding all over the inside of your microwave!

Instead, you’d probably continue heating your cocoa in ten-second bursts, checking the temperature after each increment. It’s a bit more work, but it ensures your cocoa ends up exactly how you want it to be.

That’s what the Fed is doing now by dialing back the pace of their rate hikes. They’re giving themselves a chance to see what effect each “ten second burst” has on both prices and the overall economy. The reason they feel comfortable with doing that now is because the rate of inflation is slowing, too. 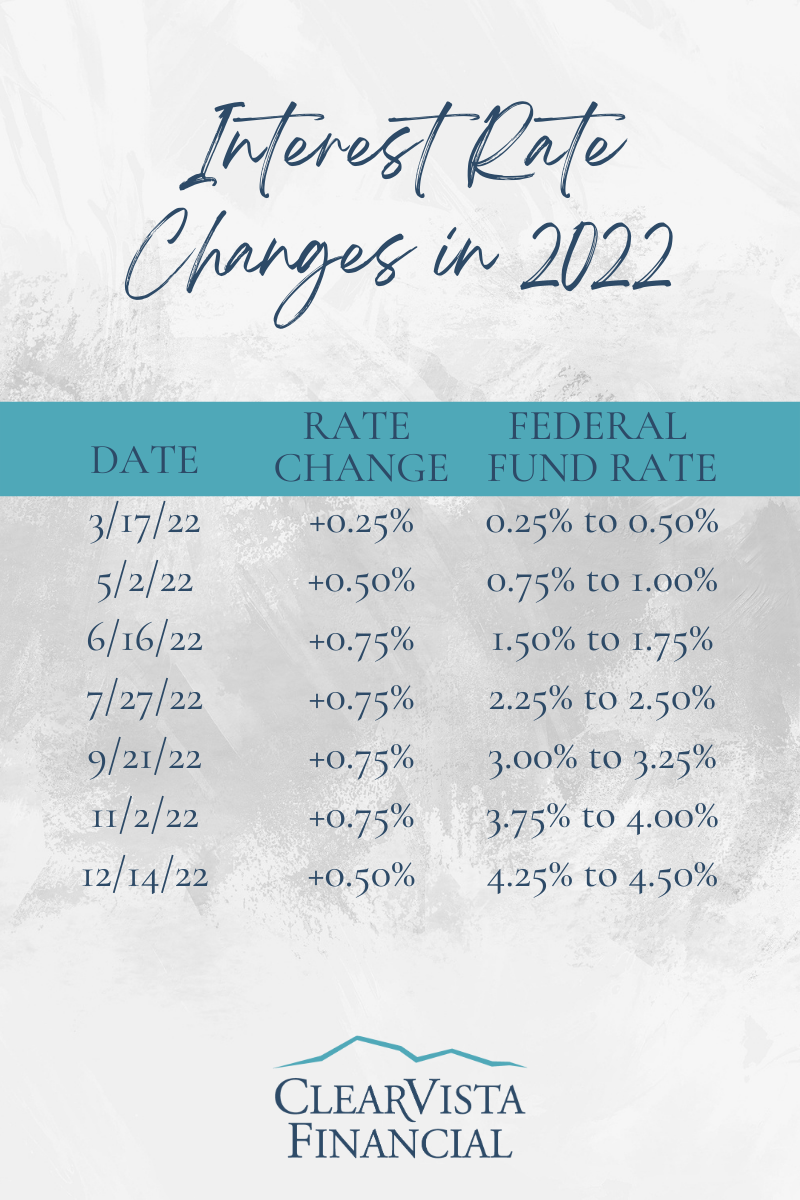 According to the latest data, inflation slid from 7.7% to 7.1% in November.3 That’s a positive sign – especially as it’s a sharper decrease than economists expected. And it’s why the Fed feels a bit more comfortable with hiking interest rates at a slower pace.

So, does that mean all these interest rate spikes are working? The answer is yes – to an extent.

You see, when the Fed raises rates, what they’re trying to do is decrease economic activity. By making it costlier to borrow money, the Fed wants to decrease how much consumers spend money. It seems counterintuitive – after all, we’re used to the idea of economic growth being a good thing! The idea is that as spending goes down, companies have no choice but to lower their prices to attract new business. Lower prices equal lower inflation.

The issue right now is that while prices are starting to go down, they are not going down evenly. Furthermore, not all these decreases can be directly tied to interest rates. For example, there’s an obvious link between interest rates and home prices. So, it should come as no surprise that the housing market has been falling for months. Auto loans are pricier too, which is why used-car prices are starting to fall.

But other areas of the economy aren’t quite so tied to interest rates. For example, two of the major sources of inflation this year have been food and fuel. Both have started to level off, but this is largely due to post-pandemic supply chains finally getting sorted out and the world adjusting to geopolitical issues like the war in Ukraine. As far as inflation’s concerned, the effect is the same – but the cause isn’t always tied to interest rates.

The reason that matters is because in other areas, higher rates are not having the effect you might expect. For example, take the labor market. Oftentimes, when rates go up, businesses cut back on hiring or delay giving raises to their employees. So far, neither is really happening. Unemployment is still near a 50-year low. Wages continue to grow at an unusually fast rate. Hiring is beginning to slow, but nowhere near what the Fed likely expected.

The result is that consumer spending continues to motor along. With most Americans having jobs and extra savings, families continue to spend. That’s the main reason we haven’t entered a recession yet. But it’s also one of the reasons that prices – although cooling! – continue to run stubbornly hot.

It also means that, while the Fed may be slowing the pace of their rate hikes, there are no plans to stop anytime soon.

On December 14, the Fed also unveiled their projections for 2023. That’s important, because these projections reveal the Fed’s intentions for the coming year, allowing us to plan ahead.

Due to all the factors, we’ve just gone over, the Fed projects they will continue to raise rates throughout the New Year. Most Fed officials predict rates will rise to 5.1% by the end of 2023 (up from 4.25% now), but that’s just the median.4 Five officials thought 5.25% was more likely, and two went as high as 5.6%. That’s significantly higher than what the Fed predicted just a few months ago, when they projected rates rising to around 4.6% for 2023.

The last time interest rates were over 5% was all the way back in 2006.2 As you can imagine, this would have a profound effect on the economy, and the Fed knows it. In fact, the Fed forecasts that unemployment will rise to 4.6% next year – up from 3.7% right now – and remain near that level through 2024.4 As a result, they also project a meager 0.5% in economic growth for 2023.4 That’s not technically a recession, but it will probably still feel like one.

Now, it’s important to remember that this is a forecast. Anyone who watches the weather knows how often forecasts change. Inflation could cool faster than anticipated, nixing the need for such high interest rates. Alternatively, inflation could continue being stubborn. Or, the Fed might raise rates exactly how they predict, only to find the economy remaining surprisingly resilient.

What it means for the markets – and for us

In 2022, there has been a spike in market volatility before and after every hike. Don’t be surprised if that continues in 2023. At the same time, investors have been playing a game of chicken with the Fed all year long, seeming to bet that the central bank won’t keep raising interest rates as high as they say, or for as long as they say. This balancing act of inflation slowly cooling off, and the economy only gradually slowing down, may be the best thing that could happen to the markets. Either way, however, we need to be mentally, emotionally, and financially prepared for more volatility in 2023.

The good news is that we already are! While dealing with volatility is never fun, it’s important to remember that active investment management already accounts for this. We expect there to be times when we need to hit “Pause” on our journey and have factored those times into our plans accordingly. The most important thing now is that we keep focusing on our mug of cocoa – tasting and testing as we go, looking for opportunities when we can and holding course when we need to.

My advice is to focus on the season. My team and I will take care of the rest! So, from all of us here at ClearVista Financial, I wish you Happy Holidays! Please let us know if there is ever anything we can do for you. May your cocoa always be the right temperature, and your gifts never be socks.

This material was prepared by Bill Good Marketing.

Check the background of this firm/advisor on FINRA’s BrokerCheck.